I. Something You Should Know About Me

I notice that, to the extent that I write about anything here, I've scarcely mentioned martial arts films - I think they've only been glancingly alluded to in the context of my Tsui Hark binge a couple years ago, although I'd have to check through more thoroughly to be sure.


The first thing I remember reading about David Lynch's ninth feature film Mulholland Dr. (or Mulholland Drive, if you prefer) was in a posting at my internet home-away-from-home, the Mobius Home Video Forum, maybe only a day or two after the premiere at the 2001 Cannes Film Festival. I don't remember which forum member wrote it, or in what capacity he was at the festival, but he was obviously not a Lynch admirer, and he was crowing lustily that the jig was finally up for the director. To paraphrase roughly from memory, Mulholland Dr. was such a fiasco - so hollow and silly a rehash of Lynch's worn-out tricks -  that even the legion of trained seals that always clapped for his latest work would have to finally admit that the emperor has no clothes (I don't think he mixed his metaphors that badly, but the "emperor's clothes" cliche was definitely there).

Lynchbinge 1: The show that broke my brain

Towards the end of this year, I will turn 40 years old. (Please hold your applause until the end.) Reminders that this is Very, Very Old multiply by the day. Recently, another one was sprung on me: "Twin what?" asked a 23-year-old colleague at the Day Job, blinking in puzzlement - or perhaps he was still dazzled by the brightness of light outside of the womb.

It was true - he had never heard of the TV show that, for a brief stretch over twenty years ago, gripped the popular culture by the throat, gazing into its eyes with the look of a maniac listening to sounds we can't hear, leaving still faintly visible bruises with its fingertips. That represented the most-unlikely-ever intrusion of avant-garde experimentalism into American network television. That took my developing and delicate teenage brain and squeezed and bludgeoned it into new shapes and then left it to recover as best it could. That, with its wild swings in creative quality, took me from unprecedented highs of ecstatic addiction to previously unplumbed lows of glum disappointment.

Email ThisBlogThis!Share to TwitterShare to FacebookShare to Pinterest
Labels: American contemporary cinema, David Lynch, The Indescribable, TV is movies too


Sometimes you have to go crazy to tell the truth. A scene early in Possession (1981) finds Sam Neill as a betrayed and estranged husband, camped out in rented quarters, red-eyed, unshaven and grimy in sweat-soaked, days-old clothes. He thrashes about on his bed like an inconsolable toddler, calls his wife but can't speak, and careens around his room and down the corridor, running into walls, collapsing on the floor, flailing and moaning like a wounded animal - in other words, embodying the Zulawski hero par excellence.


Somewhere in the course of this tableau, I recalled my own experience of bottom-of-the-barrel romantic despair, the worst days and weeks of a dysfunctional relationship close to a decade ago. And I realized that this was exactly how I felt at the time - that the only reason I didn't indulge myself similarly was my deep-seated commitment to certain norms of civilized behavior, and my network of patiently supportive friends and family. Also, I had to go to work. But if I could have gotten away with it, I would have approximated Neill's performance. With that thought, the distance between myself and the alien being on the screen collapsed into an identification as close as that with a twin brother. The filmmaker's world not only made sense to me - it became, at least briefly, my world. Never did I see more clearly that in his own way he's trying to be quite direct - by clearing away the masks of conventional expression to expose raw emotions and naked psyches.

(My previous entries on BAM Rose Cinema's Andrzej Zulawski series can be found here and here.)


Anybody who takes the time and trouble to be an enthusiast in any field has their holy grails, their tantalizing unattainables. It's like the grown-up geek's version of an ever-receding Christmas morning, where the anticipation of getting is in some ways better than the actual thing. Maybe it's the out-of-print live album, or the uncensored first publication; the baseball card with the misspelled name, or the suppressed and unfinished Polish religio-mystical science fiction epic nightmare.


To cut to the chase, last month I finally saw On the Silver Globe (1977/1988), nine years after first reading about it in Film Comment. And it was only somewhere between 30 and 40 percent a disappointment. That would be the tediously and pretentiously talky part. The other 60 to 70 percent is the surreal, synapse-frying kinda-masterpiece I was promised. Which is more than enough to make it worth seeking out if getting synapses fried is your thing.


BAM Rose Cinema's current Andrzej Zulawski series has been a lesson in how much of a difference context makes in the experience of viewing movies (or experiencing any art or entertainment). If I casually watched any one of these films on its own, I would probably react less kindly than I've been inclined to, as ridiculous and arguably pretentious as they often are. Immersion in the director's unique style has done a lot to acclimate me to its initially off-putting aspects (as they say, if you put a frog in a pan on the stove and gradually expose it to Zulawski movies... something something).

But I'm also affected by extra-cinematic influences, as most people are, whether they admit it or not. The abundant, often breathless coverage of the series in the press and online (again, see Mubi's roundup of links), positioning him as an underappreciated genius auteur finally getting his due, makes me want to like them. All these other people are so excited - I want to be excited, too. And I am, up to a point, but then I shake my head vigorously and slap my face like a movie character staving off hallucination - notice I'm sounding more sober than I did when I wrote this entry in a post-screening buzz after L'Amour Braque (about which more later), not to mention a haze of late-night, mid-week exhaustion.

Take The Important Thing is to Love (1975), Zulawski's first of several French productions (he he wasn't terribly welcome in his native Poland as far as the authorities were concerned). If I'd stumbled across this deeply strange and inconsistent love story on TV, I'd have probably watched with a quizzically tilted head and squinted eyes for a half-hour or so, and then turned it off, briefly arching my eyebrow as I walked away. But in the event, I was primed to expect certain qualities and to tolerate and even embrace certain quirks, so I was able to get something out of it and even sometimes enjoy it. It's not my favorite Zulawski by a long shot, but it's an interesting beast.

Shout, shout, let it all out: The primal scream of Andrzej Zulawski

Really, what can I tell you about Andrzej Zulawski's films? Or even about how to pronounce his name?... 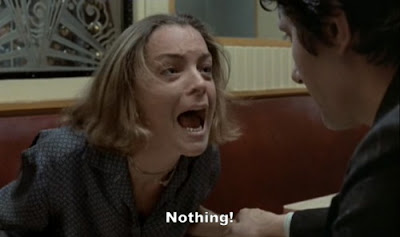 Now, that's just uncalled for. I can at least try.


Easy part first: ON-jay zhoo-WAHV-ski. Roughly. (Thanks to this quite informative fan site for confirmation on that.)

Read more »
Posted by Michael Philip Wells at 1:16 AM No comments: